It’s been literally years since you last updated the operating system powering your business’ critical software. In some cases, you may have never upgraded at all since you first launched, holding on proudly to the old adage of ‘if it ain’t broke, don’t fix it.’

So far, such an attitude seems to have served you well. After all, you’re getting the essentials done, even if doing so is a slower, much more cumbersome process than the one currently undertaken by your competitors. If that’s the case, why bother even considering upgrading that old, outdated operating system to the latest version, especially with all the recent reports of troubles caused by the new Windows 10 update?

Why? Because that old system could well be costing your business a tidy fortune. Below, the Microsoft certified IT consultants at Pacific Infotech explain just some of the ways that your current operating system could be costing you more than you realise.

Your Old OS is no Longer Supported 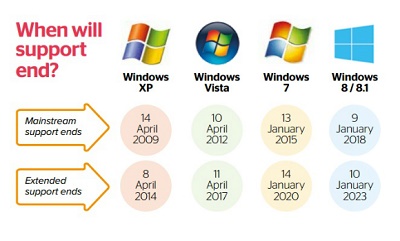 This coming April, Microsoft will officially end extended support for Windows Vista users, meaning there will be no new patches or updates to fix vital security flaws from that point on.

Meanwhile, the company already ended Windows 7 mainstream support last summer. As such, whilst there’ll still be security updates for that particular OS for a few more years, users won’t have any new service packs or Windows 7 features.

OK, so you might be able to get away without any new features, after all, you’ve managed so far, but when those security updates stop coming for your OS, that could well cause a big issue.

Without any additional security support, not only is your system easier for attackers and cyber criminals to penetrate, but it is actually more likely to be a target, since those very same hackers are on the look out for vulnerable systems they can hack into.

The result? Added costs to your business in dealing with the fall out of a security breach.

There’s a good reason that helping business to reduce downtime is one of our most in-demand services here at Pacific Infotech: Those companies know that every second their systems are offline is a second that they’re unable to meet the needs of their customers, and thus generate revenue.

What many of those business clients don’t always realise however, is that much of their downtime issues can be resolved simply by upgrading their Microsoft operating systems, and the hardware that supports them.

It’s typically the case that those running older systems are also using outdated hardware, a combination that often results in more crashes, systems freezing, and other downtime issues. By upgrading, companies enjoy significantly greater levels of uptime, increasing the amount of time they can operate, serve customers, and generate revenue.

It may have only been a handful of years since your last Microsoft Windows upgrade, but in the world of business technology, that’s practically light years. Things have evolved at such a rapid rate that new applications are simply too advanced for your outdated OS to handle.

Instead, you’re stuck with the same old system you were using years ago. Meanwhile,  your competitors are taking advantage of the latest cutting edge IT solutions, and putting them to work in adding greater efficiency to their operation. Naturally, this means your competitors gain the upperhand in your industry, whilst you’re left moving at the same old pace you have been since you started.

Your Reputation (and Thus, Your Revenue) Suffers

Companies who have carried out a Microsoft upgrade service don’t just work better, faster, and more efficiently than you, they also look better, too. Customers today have certain expectations as to how a brand presents itself, and if you’re still presenting yourself using technology that is widely out of date, those customers can tell.

As a result, you’ll develop a reputation for being an outdated company that doesn’t keep up with modern developments, and see your customers flocking elsewhere, taking your vital revenue with them.

Indeed, in a survey published just three years ago, 90% of customers questioned said they would consider taking their business elsewhere if a company used outdated technology. So, isn’t it time you thought of upgrading?

Need help, support, or advice on Microsoft upgrades? Talk to the experts at Pacific Infotech today. Call us now on 020 313 76707 or contact us online to arrange your free consultation.